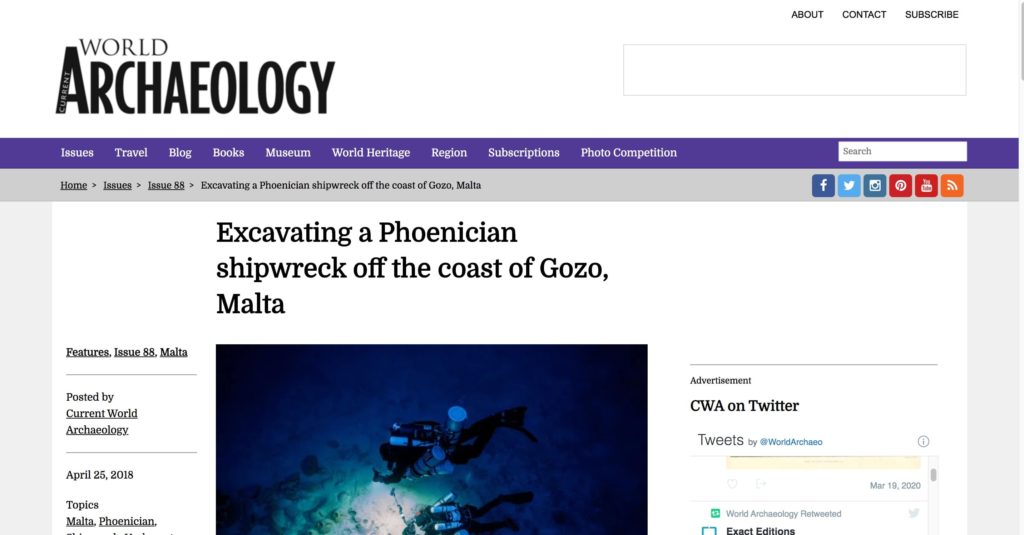 The Phoenicians occupied the coast of the Levant for over 1,000 years, but knowledge of their trade network and practices remains elusive. In 2007, an ancient wreck containing a large cache of ceramic containers was discovered off Malta. This ship proved to be one of only a handful of known Phoenician vessels. Since 2014, further exploration of the site has yielded some very exciting results. Project Director Timmy Gambin and Lucy Woods reveal some of its mysteries, and the challenges of excavating a shipwreck 110m below sea level.

Into the deep with the Phoenician Shipwreck excavation

This website uses cookies to improve your experience while you navigate through the website. Out of these cookies, the cookies that are categorized as necessary are stored on your browser as they are essential for the working of basic functionalities of the website. We also use third-party cookies that help us analyze and understand how you use this website. These cookies will be stored in your browser only with your consent. You also have the option to opt-out of these cookies. But opting out of some of these cookies may have an effect on your browsing experience.
Necessary Always Enabled
Necessary cookies are absolutely essential for the website to function properly. This category only includes cookies that ensures basic functionalities and security features of the website. These cookies do not store any personal information.
Non-necessary
Any cookies that may not be particularly necessary for the website to function and is used specifically to collect user personal data via analytics, ads, other embedded contents are termed as non-necessary cookies. It is mandatory to procure user consent prior to running these cookies on your website.
SAVE & ACCEPT
Skip to content