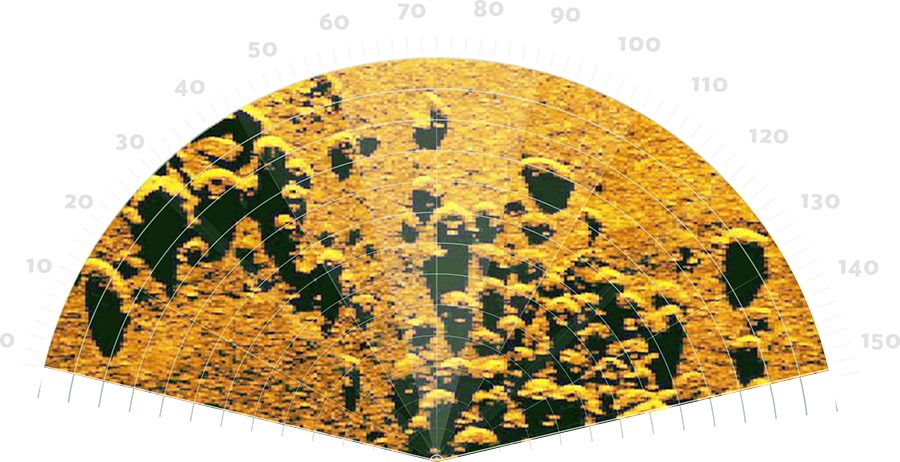 2007-2009 Seasons
The 2007 sonar survey ran parallel to the coastline off Xlendi Bay and the subsequent image processing revealed a small number of anomalies. Only one of these was considered as potentially significant. The identification of the anomaly was based on; (a) the dissimilarity between the anomaly and the surrounding seabed topography, (b) the overall shape and size being similar to that of an ancient shipwreck, and (c) rounded shadows of individual objects forming parting of the anomaly. Given the high potential of the anomaly it was decided to obtain better resolution images, the results of which strengthened the belief that this was an ancient shipwreck. In 2008/9, it was decided to capture higher frequency sonar images and conduct a sub-bottom profile survey in order to expel any doubts as to the nature of the site. The data gathered revealed that the anomaly did not form part of the natural seabed topography. A remote operated vehicle (ROV) was deployed and the primary visual record of the targeted anomaly permitted the final confirmation that it was indeed an ancient shipwreck, consisting of a mixed cargo which included western Phoenician and Tyrrhenian amphorae, worked blocks and other varieties of ceramic containers datable to circa 700 BC. The sub-bottom profile data also indicated the presence of buried objects. The sub-bottom data combined with photographic evidence provide an informed sense of what to expect when full excavation gets underway.
2007-2009 Seasons 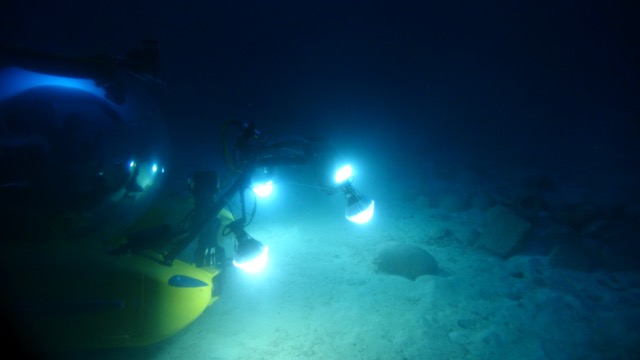 The acceptance of a grant application based on the results of the 2007-2009 expeditions allowed for an ultra-high-resolution survey of the site to be conducted in 2014. Additionally, the possible recovery of sample objects was planned, which would contribute to a better understanding of the nature of the site.

Under the ambit of the GROPLAN Project a light observation-class ROV and a two-person manned submersible were deployed, both outfitted with a payload in keeping with the aims of the project. The 2014 survey had two aims: (a) the measurement of the entire site visible on the seabed, and (b) the extraction of known artefacts from the site. Both of these aims required the documentation of the site’s position in space, as well as that of the objects within in it. The gathering and processing of high-resolution 3D data led to the production of a dense cloud model, scaled and created on real baseline distances, with a high-resolution orthophoto as a result. This allowed for each visible artefact to be given a digital label with a unique object number.

The use of a manned submersible provided by COMEX permitted field archaeologists to experience the site and identify and select objects for recovery. The selection was based on whether the object provided a representative sample of the cargo, the ease of recovery and the least amount of disturbance of the sites. 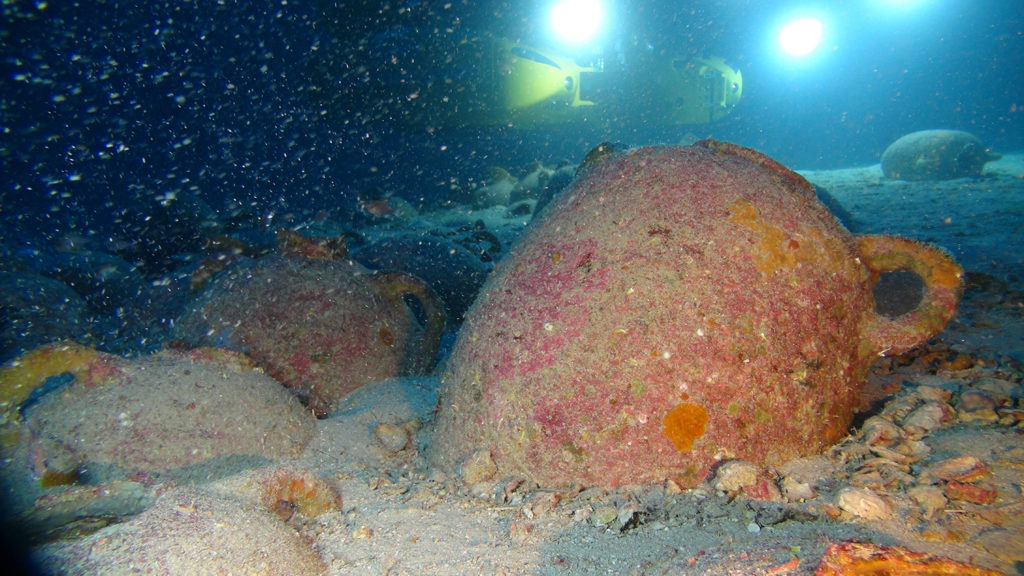 Ultimately, the chosen objects could provide a better understanding of the shipwreck, its cargo and what could be revealed about archaic central Mediterranean trade. The following four objects were chosen: (1) a saddle quern base, (2) an ovoid amphora, (3) a flat-bottom amphora, and (4) an urn. The use of a manned submersible and an ROV provided site-specific information, and methodically recorded and recovered objects to the highest scientific standard. 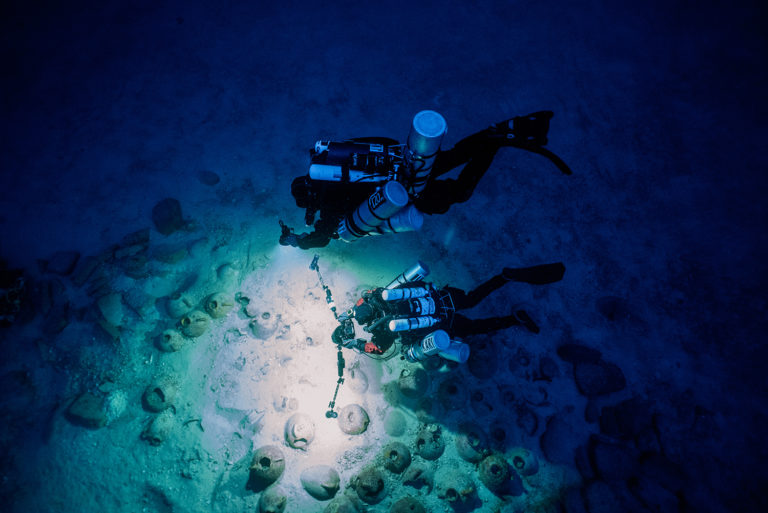 2016-2017 Seasons
The results of the 2014 expedition spurred the decision to plan further fieldwork on the site. The high-resolution imagery enabled the identification of various important ceramic typologies that were previously indistinguishable. Thus, the main objects of the 2016/2017 season were: (a) the continued systematic recovery of objects, and (b) the ongoing recording of the site using 3D photogrammetry. Restricted funding in 2016 resulted in the decision to use divers, with the depth of the site excluding the use of standard SCUBA equipment. A decision was taken to use closed-circuit rebreather (CCR) divers, however, the complexity of organising such an expedition on day-to-day basis cannot be underestimated, for each diver utilised a total of circa 5 hours in order to spend 12 minutes on the site. Data capture for 3D photogrammetry of underwater sites usually revolves around still photography, which in this case was not possible due to the depth of the site and the limited working time on the bottom. Thus, a different approach was needed, and it was decided to use video as the primary form of data capture. 3D photogrammetry based on video captured by a team of divers is a relatively new methodology and one that proved to be an extremely time-economical system to record deep-water sites, without needing to compromise the quality of the data. Objects chosen for recovery these seasons included; (a) typologies not recovered during the 2014 season, (b) typologies similar to those already recovered for comparative reasons, (c) a handstone, and (d) fragments that were clearly in secondary positions. A total of eight whole objects (seven ceramic and one stone) and three fragmented objects (all ceramic), were raised during this season. Having direct contact with the site allowed the team to apply a more flexible approach when it came to site recording and object recovery.
2016-2017 Seasons 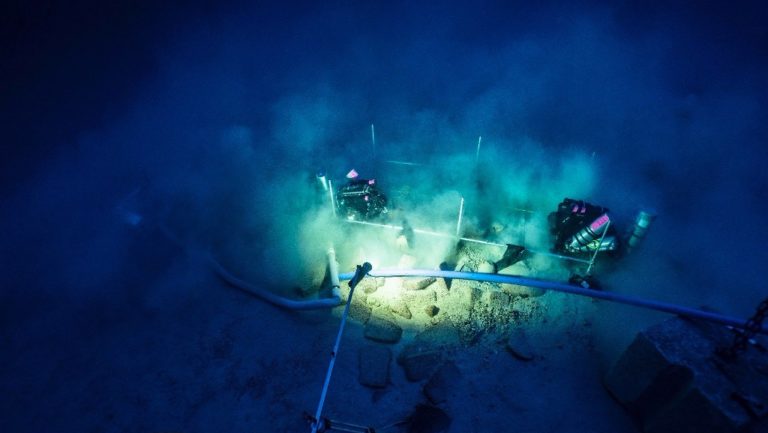 2018-2019 Seasons
The main objective of the 2018 season was to conduct an archaeological excavation at 110 metres of depth, despite the lack of established approaches for excavations at this depth and without compromising scientific standards. This was achieved through the setting up of six permanent survey control points in an elliptical order, and the excavation of a 4×2 metre grid, divided into 2×2 metre units with 1×1 metres subunits, positioned at the western limit of the site, where grinding stones and amphorae meet. A hydraulic-powered submersible pump was used for the excavation, with all excavated material deposited in two spoil bags in order to allow for the sieving and screening of all excavated material. The progress of the excavation was recorded on daily basis, with the first dive of the day always dedicated to data acquisition with the 3D team recording the trench as left at the end of the previous day. Newly exposed artefacts were also digitally labelled and sediment samples were taken from close to all six control points. Towards the end of the excavation, three amphorae and one grinding stone were recovered from the trench and a final 3D survey was conducted on the last day, and the excavated area of the site was covered with geotextile. A find of note was that of a small loose fragment of wood in the upper levels of the sediment, which was sent to France for testing. The raising of public awareness, both locally and internationally, of the archaeological significance of the site is an important aim of the project. In order to facilitate this, a public talk was organized by the Munxar Local Council, well attended by the local community, and a small exhibition was opened in the Citadel of Rabat in Gozo, attracting both local and foreign visitors. 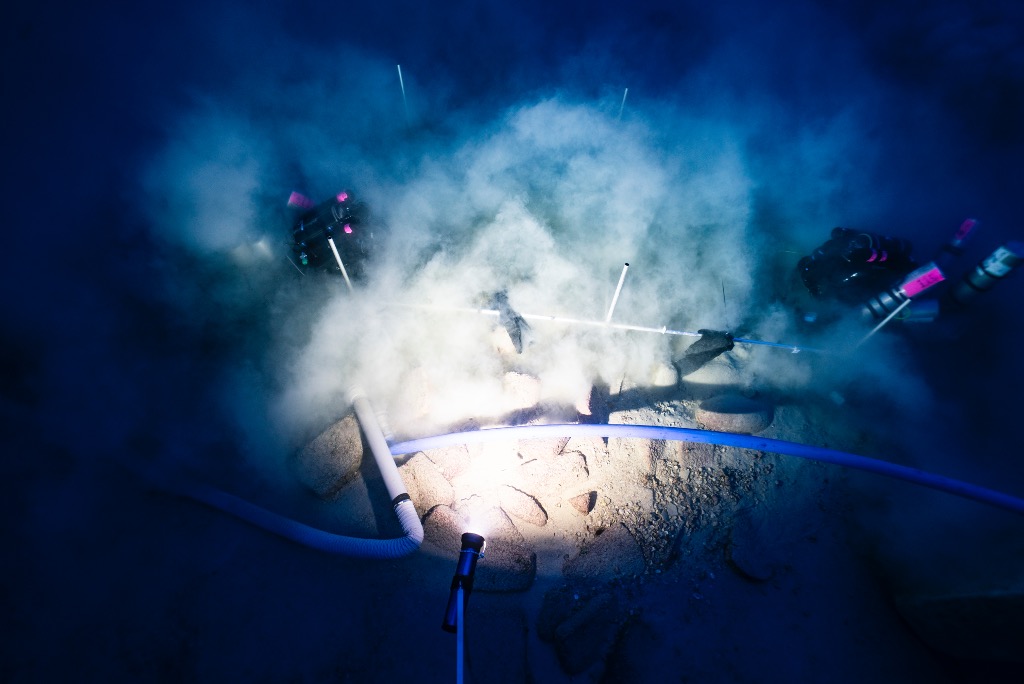 The main objective of the 2019 season was to continue the archaeological excavation of the test trench started in 2018, with the lessons learned in the previous year ensuring a more efficient season. The 3D photogrammetric surveys of the excavation trench were continued on a daily basis, allowing for daily planning and refining of excavation strategies. As in the 2018 season, a hydraulic-powered submersible pump was used, however at times hand-fanning and trowels needed to be utilized. Any recovered archaeological material was placed in mesh bags and marked with the relevant information of each of the grid’s subunits. A small ROV was used this season in order to film the trench at the end of each day, allowing for a more efficient planning of the next day’s strategy. The ROV was also used to ensure that the surface pump was connected as it should and could be deployed safely. The objects recovered in 2019 are: (1) a partial Phoenician fineware ceramic bowl, (2) a small urn with four lugs, (3) numerous miscellaneous ceramic sherds and fragments, (4) an object with metallic properties, (5) a large fragment of timber that was loose in the lower levels of the site, and (6) a ‘piece’ of what is believed to be bitumen. At the end of the season a final 3D survey was conducted, and the excavated area of the site was covered in two layers of geotextile. The public outreach campaign was continued this season, with a well-attended public talk organized in collaboration with the Munxar Local Council in Xlendi, and the presentation of the Phoenician Shipwreck Project to the general, local and foreign, public at the Science in the City event organized in Valletta. 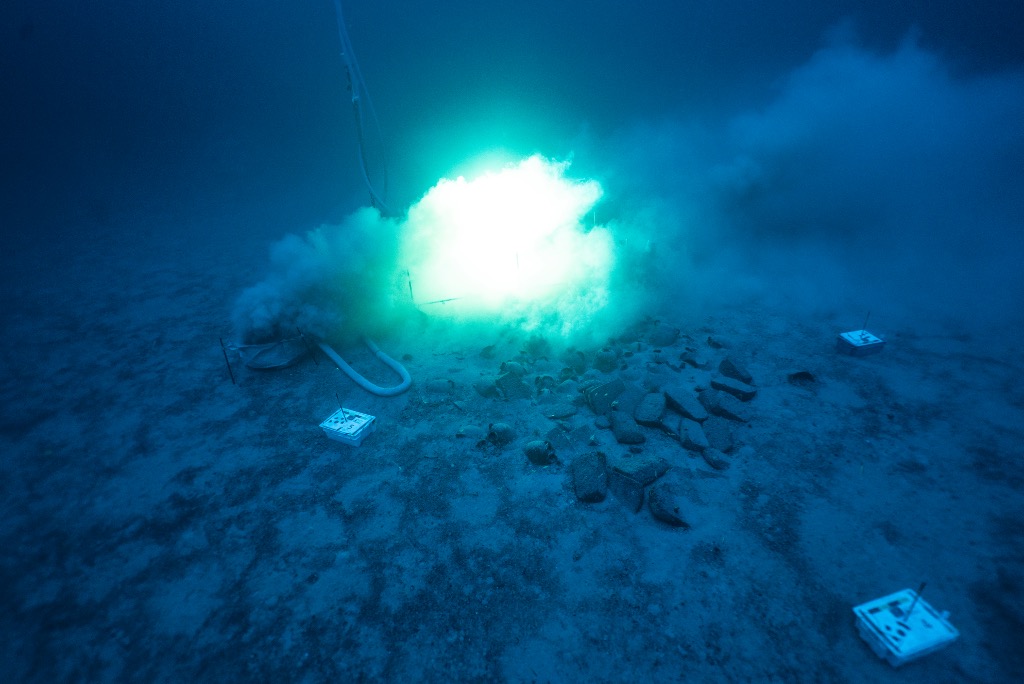 The plan for the 2020 season is to continue with the removal of sediments in order to acquire a detailed and high-resolution record of the cargo in this section of the wreck. Following this the plan is to recover cargo elements so as to expose and record the ballast in-situ.
2018-2019 Seasons 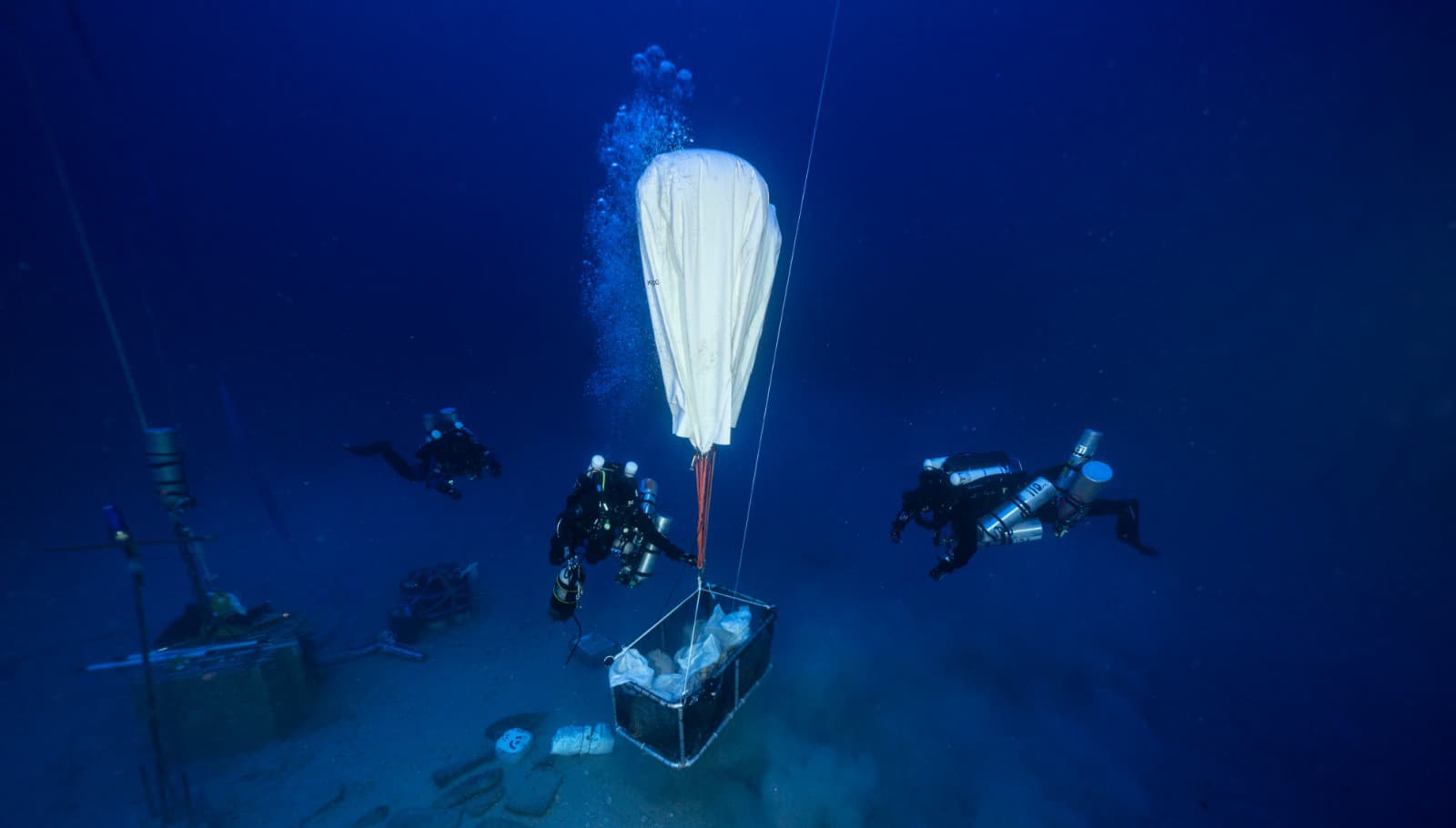 The main objective of the 2020 season was to continue the archaeological excavation of the test trench started in 2018 using techniques refined over the past 2 seasons. Once again, 3D photogrammetric surveys meant the limited bottom time did not compromise the accuracy of the documentation process. Recording the trench each day helped monitor changes and assisted in the formulation of effective excavation strategies each day. The site grid was reinstalled to allow for systematic excavation. A dredge powered by a hydraulic- submersible pump helped to clear the site of excess sediments, especially removing silt that was dislodged with the use of hand-fanning techniques and trowels. Small objects which came loose during excavation were put in a mesh bag and large objects were recovered using a lifting basket. Given the successful use of the ROV in the 2019 season, the device was deployed at the end of each day to film the trench while providing additional efficiency and safety with a line of communication to the surface. 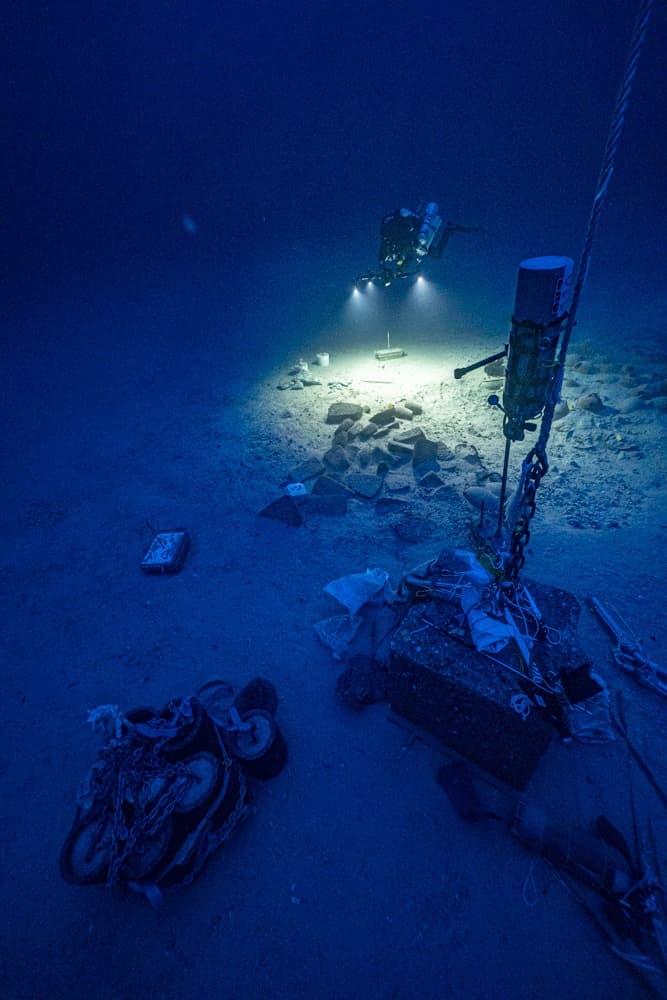 The number artefacts recovered in 2020 exceeded objectives. 33 complete or partial amphorae of mixed typologies were raised, two of which have rare graffiti etchings. 3 jugs and 3 small cooking pots were also discovered between the larger objects in the cargo. Important organic artefacts were collected, including loose pieces of wood that may be hull fragments, as well as molluscs. Sieving is underway to determine if there are more molluscs inside the ceramic containers. These sieved layers may provide clues about past environmental conditions with further study. Scientific testing will be conducted on both the ceramic and organic materials to determine the date and origin. On the final dive a post-excavation 3D survey was completed, and the trench was covered in two layers of geotextile held in place by sandbags. 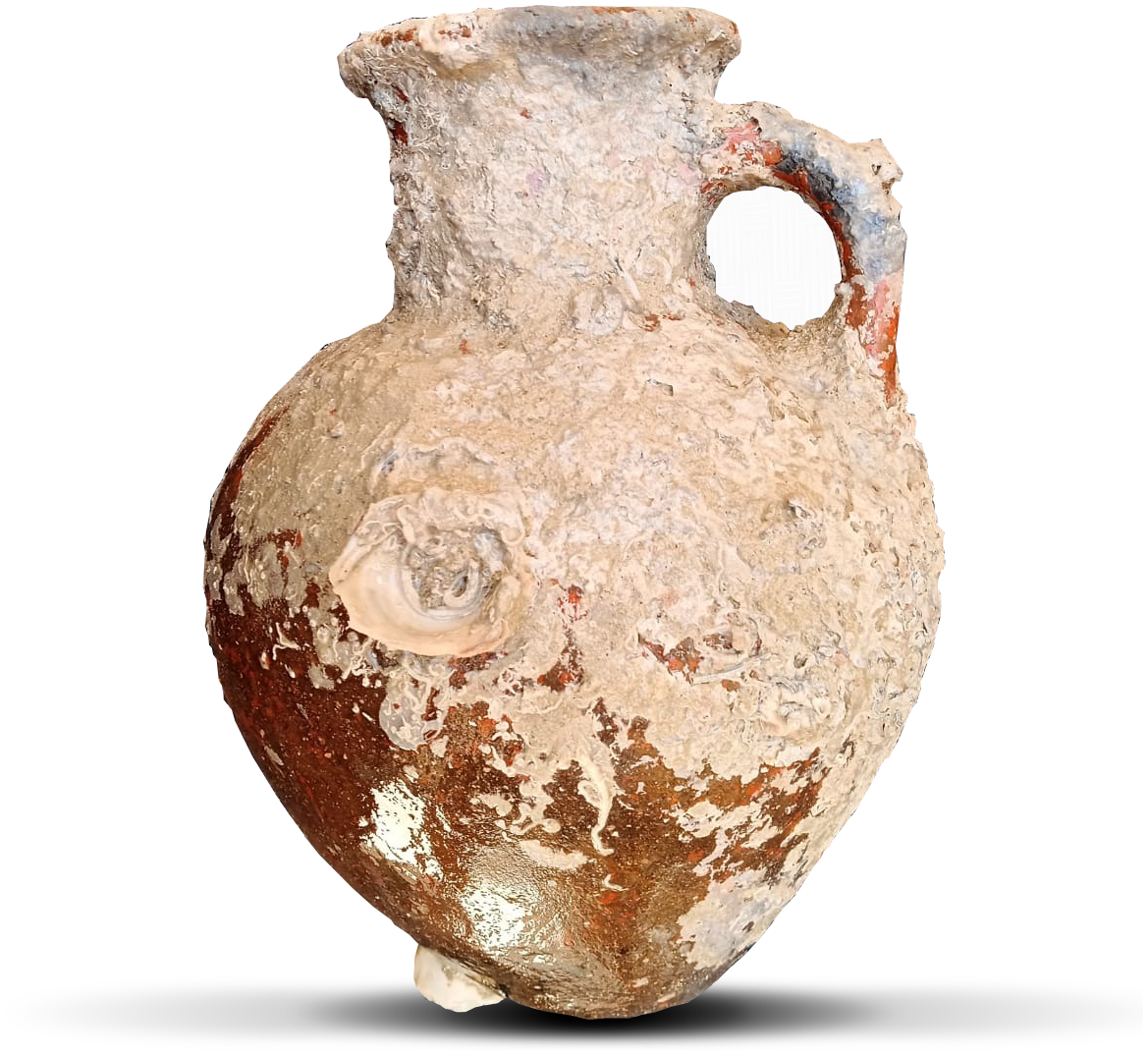 The public outreach campaign needed to be adapted due to COVID 19. The online talk presented by Project Director Prof. Timmy Gambin was well attended, the official Phoenician Shipwreck website has received increased traffic, and the interactive model of the site is available to explore in the Underwater Malta Virtual Museum. The aims for the 2021 season are to continue the excavation in the trench which are expected to contain the lower layers of cargo and the hull and continue refining methodologies for deep water archaeology.

Any cookies that may not be particularly necessary for the website to function and is used specifically to collect user personal data via analytics, ads, other embedded contents are termed as non-necessary cookies. It is mandatory to procure user consent prior to running these cookies on your website.